What to Learn From Tropicana’s Packaging Redesign Failure? 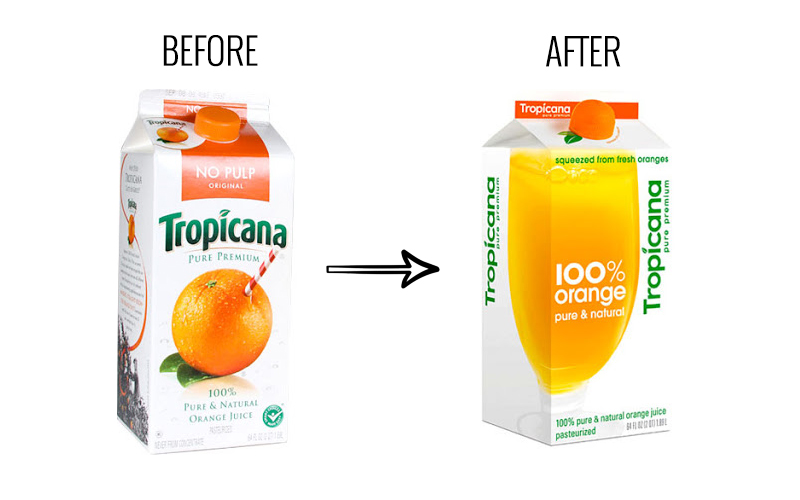 Tropicana’s 2009 packaging redesign failure is in my eyes one of the most interesting case studies about branding through packaging design.

At The Branding Journal, we like to feature branding success stories. However analyzing branding failures can sometimes be even more interesting, as it allows us to learn from past mistakes.

Tropicana is a very famous brand that sells fruit juice worldwide. On January 9th, 2009, the PepsiCo-owned brand decided to replace the existing packaging design for its best-selling orange juice with new packaging for the North American market.

However, this new packaging design was rejected and criticized by the majority of Tropicana’s consumers. The launch of the new packaging was indeed such a failure that Tropicana had to drop it to come back to the original version of the packaging. 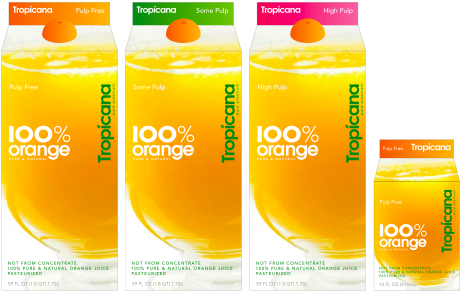 Recap of the facts:

First of all, let’s summarize the facts to better understand the reasons for this packaging failure.

Differences between the original packaging and the new one:

To understand this strategy failure, it is important to analyze what did Tropicana change in its packaging design.

“We thought it would be important to take this brand and bring it or evolve it into a more current or modern state.” stated Peter Arnell, director of the creative agency Arnell in his speech explaining the strategy chosen for the Tropicana product.

Perhaps one of the most important changes is the fact that a big transparent glass full of orange juice replaced the orange and its straw.

“Historically, we always show the outside of the orange. What was fascinating was that we had never shown the product called the juice.” 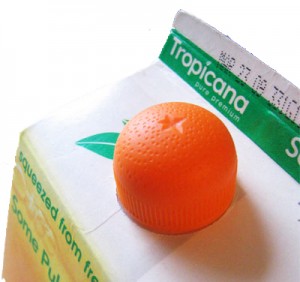 The agency decided then to take the orange and move it to the lid of the bottle. The idea is creative and interesting, as we can see that the cap really has the shape and texture of half an orange that you can squeeze to obtain a fresh orange juice. This message goes along with the new advertising campaign launched by the same time, and both the packaging and the ad include the statement “Squeeze, it’s a natural”.

“We wanted to take the orange and put it somewhere. We engineered this interesting little squeeze cap here … so that the notion of squeezing the orange was implied ergonomically.”

Another important difference between the two packs is the new logo design.

The original one was horizontal and followed by the product name “Pure Premium”, while the new logo is vertical with a simpler and more modern font. The logo size was also reduced to highlight the message: “100% Orange Pure and Natural”

The advertising campaign that was released with the new packaging design

Tropicana released a new advertising campaign along with its packaging strategy. The main message communicated in this campaign was “Squeeze, it’s a natural”.

“The whole idea of ‘squeeze,’ ” Mr. Campbell said, is to play up “the functional benefit” of orange juice in providing fruit for people’s daily diets “and the emotional connection people have with Tropicana.” 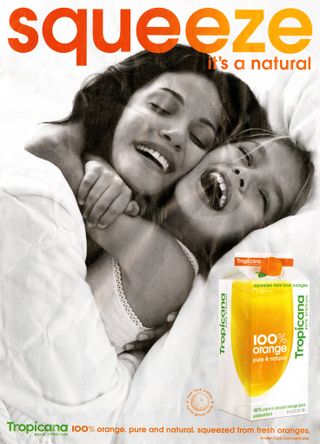 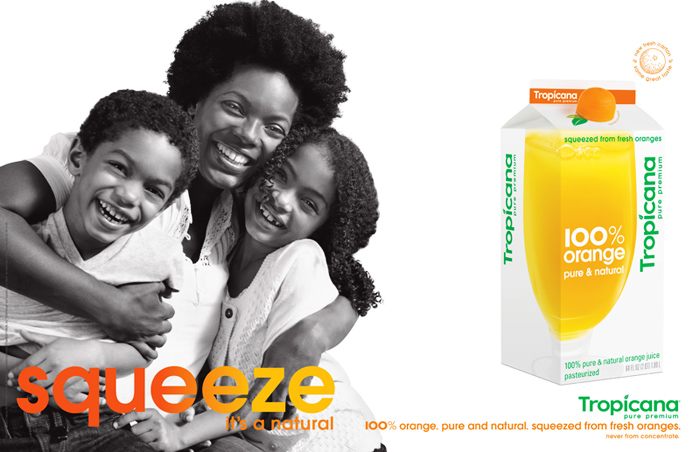 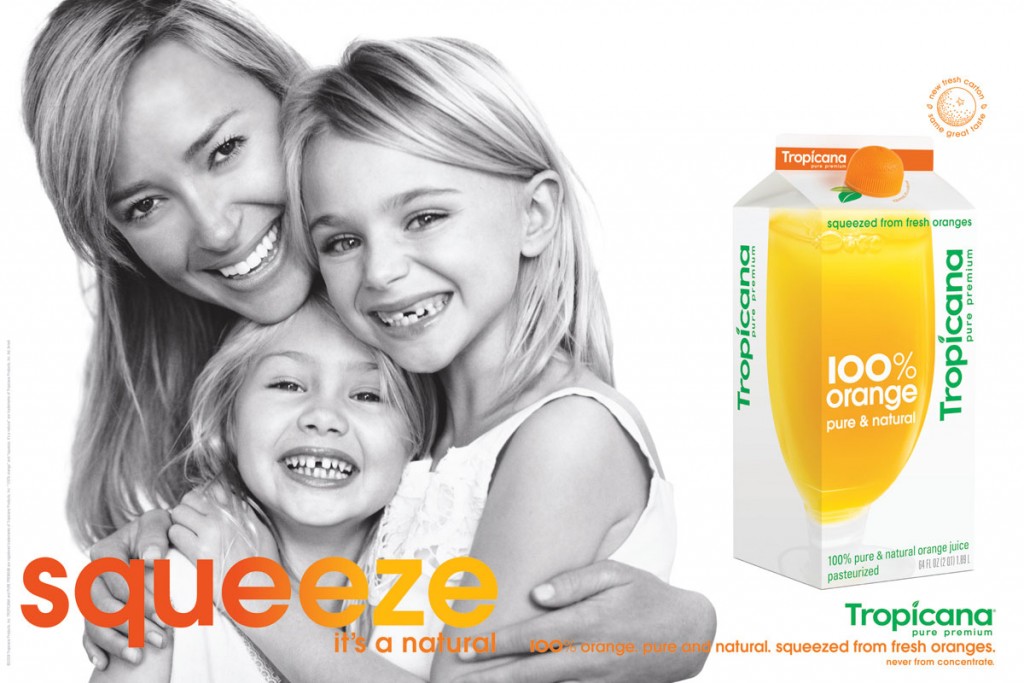 Emotional bond with the brand

“We underestimated the deep emotional bond they had with the original packaging” […]“What we didn’t get was the passion this very loyal small group of consumers have. That wasn’t something that came out in the research. […] Those consumers are very important to us, so we responded.” explained Mr. Campbell, president at Tropicana North America in Chicago.

The role of packaging in purchasing decisions processes

Perhaps the problem goes beyond this emotional bond consumers had with the old packaging.

It is very important to consider the role of packaging design in branding and its link with merchandising. Young and Ciummo stated in their article that packaging redesigns often come with a small decrease in sales, but this tends to be temporary and has never been as severe as the 20% decrease experienced by Tropicana.

In this case, many consumers didn’t recognize the product on supermarket shelves. Some loyal consumers saw the “100% Orange Juice” and asked themselves if the product was still the same as the Tropical Pure Premium they always trusted. Then appeared a series of confusions in consumers’ minds who lost their main reference elements to recognize the product. These include:

The look and feel of the new design:

To finish, and because the packaging had a more simple design than the original one, most consumers described it as “ugly”, and explained it seemed to be from a low-range supermarket brand. Consumers were confused by this new look that made the brand seem to be cheap, as Tropicana had always been perceived as a premium brand.

What to learn from this case study:

Branding is a complex subject and it is often difficult to predict the market’s reaction to a strategy change.

However, I believe that both from an individual and company-standpoint, we can learn several lessons from Tropicana’s strategic mistake:

Consumers have an emotional connection with brands they purchase and can feel betrayed and disappointed if they suddenly can no longer identify with new brand elements of the packaging design. It is important to always consider this before making changes to packaging designs.

If you want to redesign your product’s packaging, make sure you do not change everything at once. The changes need to be done progressively to ensure the consumer will still recognize the brand.

Of course, this only applies to successful brands such as Tropicana. If your brand and product are not doing well, a total rebrand can be a good solution to save the product on the market. In fact, we’ve seen many cases (Herbal Essences comes to mind) in which significant packaging changes have driven sales.

Packaging is the last communication element brands have with consumers in the purchasing decision process. Its design and content are essential to the brand because it will influence the consumer’s decision at the last minute. Tropicana’s consumers didn’t recognize or like the new product design and therefore decided not to purchase it.

Of course, packaging and advertising strategies should always be in line, as with any marketing activity in general. However, there are some communication codes for each domain that need to be respected. In the case of Tropicana, the packaging codes weren’t, and this caused the failure of the new design.

The Tropicana redesign illustrated the considerable power of packaging. While this was a distinctively negative example, it’s important to keep in mind that this same power does often work in a positive direction.

The takeaway for marketers and brand strategists should be even greater respect for packaging and a deeper commitment to leveraging this brand asset with a methodical procedure. This will ensure consumers accept the change in a positive manner!

Previous reading
Branding for political parties: The 2015 UK General Elections analyzed by Siegel+Gale
Next reading
The Top Branding Agencies In The World [2020]